One hour of heavy petting

I went to a cat cafe in Osaka yesterday. Although, describing it as a "cafe" is somewhat misleading. It's more of a cat brothel than a cat cafe.

It's hidden inside a nondescript office building. An elevator discreetly whisks you up to the third floor. The elevator opens into a small hallway where you must remove your shoes and put on a pair of slippers. 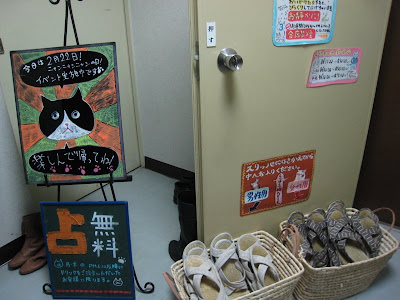 You then open a sliding door to enter the cafe but before you can go any further, you are instructed to hold out your hands, palms up, while an employee sprays them with disinfectant.

You are then directed to the counter to pay in advance. Six hundred yen (about $5) gets you all the cats you can stroke for an hour. A few hundred yen extra gets you a drink to quench your thirst after all of the heavy petting is over.

After you have removed your shoes, sterilized your hands and paid your money, it's time to get down on your knees and play with the cat of your choice. 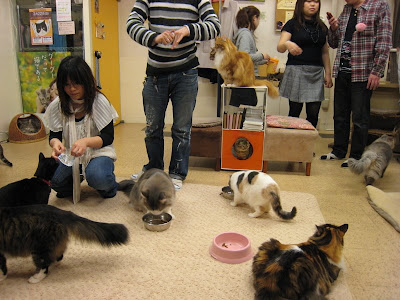 The cafe is called Neko no Jikan 猫の時間 (or "Cat Time" in English). The 20 cats that work here have free range of the place, sitting and sleeping wherever they like.

The cafe consists of two large rooms. There is the cafe area, which is exactly what it sounds like. There are couches and small tables where you can sip a cup of coffee while a cat sleeps on your lap or at your feet. It is a cozy space with soft lighting and classical music playing quietly in the background. 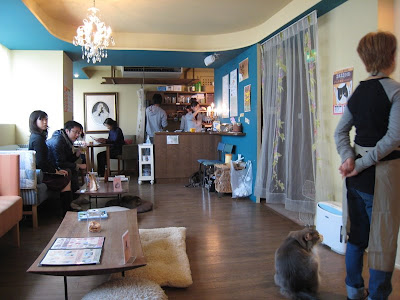 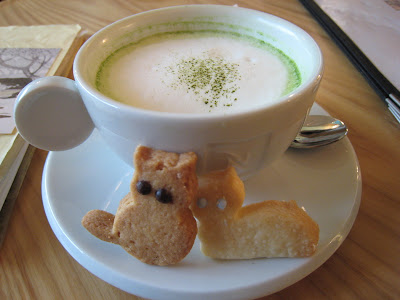 The other room, attached to the cafe, is best described as a cat playroom. No drinks are allowed in this room. You can play with the cats or just sit on one of the many couches and watch all of the four-legged loving go down. 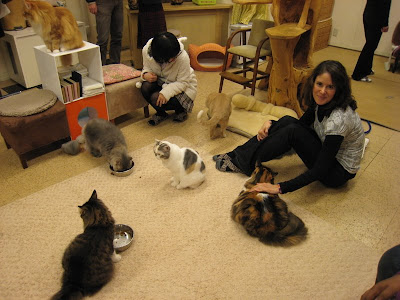 The cafe was busy but not crowded. The vast majority of customers were women. There were a few men but they had all come on the arms of their girlfriends. The most enthusiastic customer was a middle-aged man with a 1950s rock-and-roll pompadour. He made a point of talking to all of the cats, clucking and cooing over their every move.

"Oh look at you! You sure like to sleep don't you? Oh, yes you do. Yes you do. You cute little sleeper you."

(I am translating this from Japanese so that might not be exactly what he said but the meaning behind his words was clear.)

Of course, cats being cats, it was somewhat difficult to seduce them into spending time with you. They would sit in your lap for about a minute before squirming out of your embrace.

If you wanted a cat to play with you, you were better off buying some tuna from the cafe in order to lure them in. These ladies bought some tuna and they were instantly the most popular people in the room. 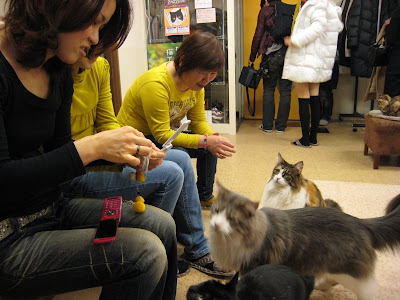 The woman with the pink cell phone on her lap could tell I was feeling a bit left out so she handed me a piece of her tuna. As soon as I started waving the tuna around, I had no shortage of cats wanting to sit on my lap. But once the tuna was gone, so were they.

Everyone was pouring out love to these cats but the cats weren't giving much back. Cats do not love openly and blindly like dogs. Cats can be affectionate and playful but they are also independent and solitary (or stubborn and uncooperative, depending on your viewpoint). I was happy enough just to be near them. 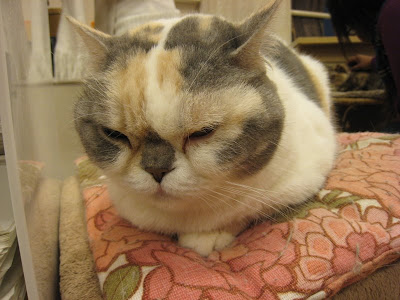 I had never heard of cat cafes before coming to Japan and I'm surprised the trend hasn't caught on in the rest of the world. Cat cafes are a great idea, especially for people whose landlords won't allow pets in their buildings. Or for people who can't have a cat because they live with an allergic partner.

It's a brilliant concept. If I can find a cat cafe in Kyoto, I'm going to go at least once a month.

If you are in the Osaka area and want to visit Neko no Jikan, you can find a map here. There is no English spoken and no English menus so be sure to learn some basic Japanese before you go. Of course, that's just to communicate with the staff. You only need to speak the language of love with the cats. 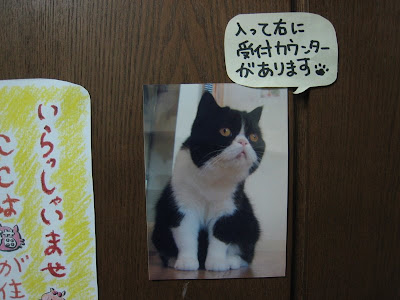 Nice post! I was googling about cat cafe to find more info and I found yours .

Hi Michelle. Glad you liked it!

Reading about your experience at the Neko cafe makes me want to go visit Japan so much more!

Go!!! I can't recommend a trip to Japan enough. A Neko Cafe is an added bonus.

Greetings admin I like your topic, after reading your article very helpful at all and can be a source of reference I will wait for your next article updates Thank you, for sharing