I've been thinking about the Eliot Spitzer affair lately. Not his actual affair with that high-priced hooker. But the whole media firestorm surrounding the scandal.

No matter how hard I try, I just can't imagine something like this happening in Canada.

I mean, I can certainly imagine Canadian politicians getting down and dirty with interns and prostitutes. Marital infidelity among the political elite is probably just as common in Canada as it is in America. The only difference is we simply don't care.

Think about it. When was the last time we had a Canadian sex scandal? We don't do sex scandals in Canada (well, except for that Toronto cooking show host whose husband ran off with Tori Spelling).

Let's Canadianize the Eliot Spitzer affair for a moment. Let's pretend a Canadian premier was discovered spending thousands of dollars (of his own money) to do things (on his own time) with expensive call girls.

Would journalists in Canada report this story? Would there be a media firestorm? Would the premier buckle under pressure and resign?

While political sex scandals make Americans foam at the mouth with moral outrage, most Canadians would probably just shrug their shoulders.

We don't care if a premier cheats on his wife. Yes, it makes him sleazy and duplicitous. But if he's doing it in his private time and it's not interfering with his job, it doesn't really matter.

I don't understand why people down in the States are getting so worked up about Spitzer.

I also can't wrap my head around these American wives who stand up on stage to support their lying, cheating husbands. If I was married to Eliot Spitzer, I'd be too busy filing for divorce to be up on stage looking all sad and victimized beside the two-timing sleazebag.

Even more puzzling is David Paterson, the man stepping in to replace Spitzer as governor of New York. One day after being sworn in, the new governor felt compelled to tell the world that he and his wife both had extramarital affairs. 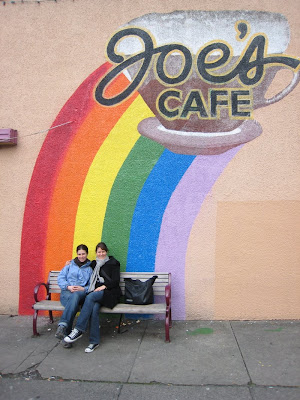 I hung out on Commercial Drive this weekend. I don't normally spend a lot of time on the Drive but now that my sister lives there it looks like I'll be making the trek to East Vancouver more often.

This thought fills me with dread. It's not that I don't like Commercial Drive (what's not to like?). I just don't like the annoying hipsters and earnest do-gooders who hang out there.

The hipsters are easy to spot in their matching army jackets, Elvis Costello-style glasses, shoulder-strap messenger bags and old-school sneakers. They can be found having pretentious conversations about indie bands or foreign films in one of the many organic, fair-trade coffee shops that line the Drive.

They don't look like they’re having a lot of fun. Their sense of humour seems to revolve around being superior to the lowbrow masses. For example, if you showed up on the Drive wearing a Nickelback concert t-shirt, people would laugh appreciatively at your brilliant irony.

All wonderful things but I could do without the bongo-playing, patchouli-wearing, dreadlock-loving space cadets the Drive tends to attract.

I always feel like an outsider on the Drive. I’m not cool enough to be a hipster (I like Top 40 music in an unironic way) and I'm not earnest enough to be a do-gooder (I refuse to give up long, hot showers for the sake of the planet).

Maybe I'll just make my sister hang out with me in my neighbourhood from now on. We can sit inside one of the many Starbucks that line West 4th Avenue and watch the bottle blondes in their lululemon pants, ugg boots and fur-lined hoodie bomber jackets go by.
Posted by Sarah Marchildon at 3/23/2008 No comments:

Email ThisBlogThis!Share to TwitterShare to FacebookShare to Pinterest
Labels: Vancouver

The honeymoon is over, the thrill is gone, the novelty has worn off. I'm so over Facebook.

Oh, sure. The Book was fun at first. The cyber stalker in me reveled in looking up (and being looked up by) old high school crushes. There was a certain perverse joy in finding out that most of my former flames were leading pretty boring lives.

I got caught up in the rush of joining random Facebook groups like the "I Will Go Slightly Out of my Way to Step on That Crunchy-looking Leaf" group and the "Just Because We're Both Gaijin Doesn't Mean We're Friends" group.

But, in the end, Facebook is just another distraction I don't need. There are too many applications, too many "friend" requests, too many people poking me (what's the point of all this cyber poking anyway?), too many people tagging me in unflattering photos, too much time spent untagging myself from said photos. Who needs it?

Now, before I leave The Book behind forever, I want to share a funny story about connecting with someone from my past on Facebook. Someone I haven't seen or talked to since he broke my heart in elementary school. Let's call him "Paul Gorma."

Paul Gorma and I go all the way back to junior kindergarten. Paul Gorma was the king of kindergarten. He was funny and cute and had a big gap between his front teeth and even bigger brown eyes. He was always getting into trouble but had a magical way of charming his way out of it.

Each night I clutched his stuffed effigy close to my chest as I fell asleep. I loved Paul Gorma the bear and the boy equally.

Over time, my crush intensified and by Grade 2 I couldn't keep my feelings inside any longer. I wanted to let Paul Gorma know how I felt about him. Maybe he'd love me back! Maybe he'd kiss me behind the slide! Maybe we'd go out (and by "go out" I don't mean that we'd actually go anywhere. I mean maybe we'd kind of be boyfriend and girlfriend who'd maybe hang out during recess sometimes. Because that's how romance worked in elementary school).

So I decided to bring Paul Gorma (the bear, not the boy) to show-and-tell and introduce him to the entire class. I don't remember what I said exactly. But I do remember holding the bear up above my head and telling the class that his name was Paul Gorma and being shocked when all of the kids in the class (and even the teacher!) broke out into hysterical laughter. I wasn't trying to be funny.

Looking back on it now, I don't blame the poor kid for freaking out. I mean, a crazy stalker names her teddy bear after you? And announces it in front of the entire class? Run, kid, run! (I suppose it didn't help that I liked to come to school wearing yellow plastic sunglasses with the lenses poked out while pretending to be a British exchange student by the name of Kimberly Leblanc.)

At the time, I was crushed by Paul Gorma's harsh rejection. But I never thought to change the bear's name.

[Side note: The bear actually did undergo a temporary name change during my university years. I was dating a guy who went to high school with Paul Gorma. Seeing my bear for the first time, he asked what his name was. Thinking it might be kind of awkward to tell him the truth, I made up a new name on the spot. And, not being one who thinks very quickly on her feet, I told him the bear's name was "Um . . .Ted." After we broke up, the bear temporarily known as Ted went back to being Paul Gorma.]

I haven't seen or spoken to Paul Gorma since he shunned me in elementary school. I'm not going to spell it out in years, but let's just say that it's been a very long time.

Fast forward to 2007. A few months after joining Facebook, I got a friend request from none other than Paul Gorma. It was a strange feeling to see that name pop up in my inbox. It put me right back on the playground.

That's right. He asked me if I still had the teddy bear I named after him!

Oh, Facebook, thank you for that long, strange trip down memory lane. Everything has now come full circle. 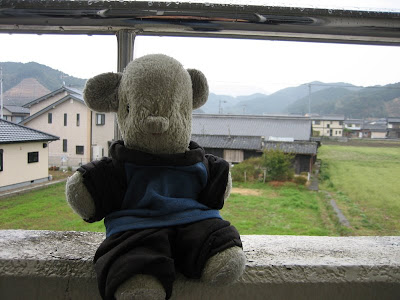 "Paul Gorma" chills out on the balcony at the apartment we shared while living in Japan. Paul and I miss Japan a lot.
Posted by Sarah Marchildon at 3/18/2008 No comments:

I've been neglecting this blog lately. I feel like a slum bloglord.

As much as I love blogging, it's not a particularly lucrative hobby (at least it's not for me. Some bloggers get advertising dollars and book deals. I'm not one of them).

Anyway, that's it. I just thought I should drop in to explain my lengthy absence from this space. My article is due on Monday so my reign as a slum bloglord will end soon.

(Also, while I'm busy procrastinating, can I just say how excited I was when I googled "slum bloglord" and it returned zero hits? Have I just created a new term for people who neglect their blogs? I can't believe no one else has used this before.)
Posted by Sarah Marchildon at 3/15/2008 No comments:

What's wrong with this picture? 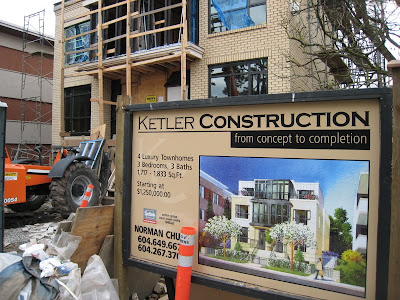 Take a look at this construction project. Is there anything about it that strikes you as unusual? Because all I can see is a bland, boxy apartment building with an unattractive yellow brick front.

I didn't think there was anything all that special about it when I walked past it the other day. And then I took a closer look at the sign posted out front. 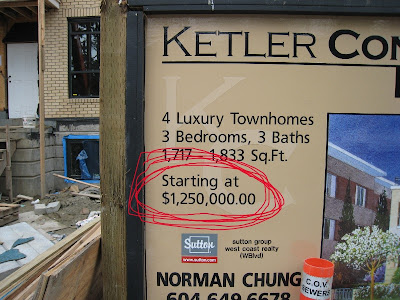 Everyone knows that Vancouver has the highest housing prices in the country. But this is ridiculous. How can anyone afford to buy a place here?

I certainly can't. Not on my salary.

Moving out to the suburbs is not an option. I refuse to spend a good part of my day commuting to work. It's just not worth it. I want to live in a neighbourhood where I can get everywhere I need to go on foot or by bike. But the only way I can afford to live close to downtown Vancouver is to rent.

I will never be able to afford to buy a home in Vancouver. Not when the average house price is nearing the $1-million mark.

Who are all of these people with their million dollar homes? And where did they get the money for the down payment? Do they supplement their income with a grow-op or a crystal-meth lab in the basement? Or are they simply up to their eyeballs in debt?

Something is seriously out of whack here.
Posted by Sarah Marchildon at 3/05/2008 No comments: 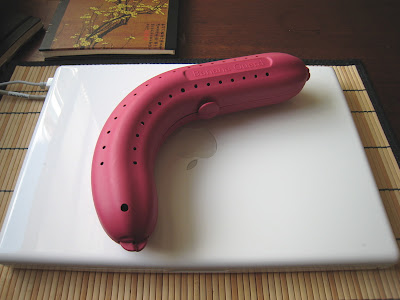 Get your mind out of the gutter, people. It's not a sex toy. It's a banana protector! 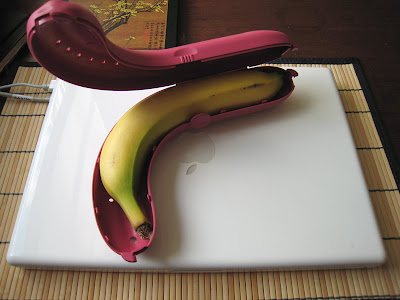 According to the Banana Guard website, the device was created by three Vancouver ER doctors who were concerned about "the fruitless amount of banana trauma and abuse taking place in the world . . . You can now take your banana to work, school or play secure in the knowledge that no harm will come to it."

Yay! No more squashed bananas in my bag! 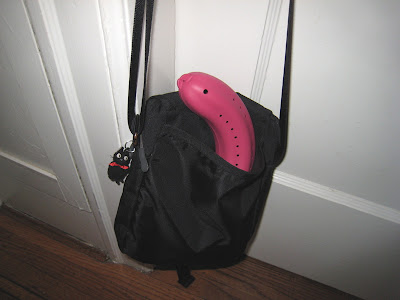