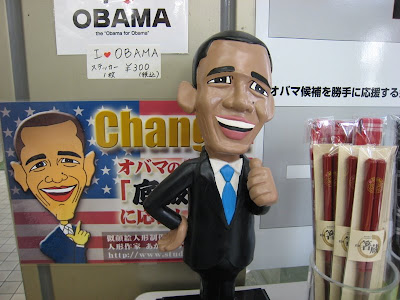 If Barack Obama wins the U.S. election tomorrow night, there will be few people more excited than the people who live in Obama, Japan.

They have embraced Obama with the kind of gusto, entrepreneurial spirit and quirkiness you can only find in Japan.

I spent the past weekend in Obama, and awesome doesn't even begin to describe how awesome it was.

The charming portrait of Obama featured in the flags and posters that line the town's main street looks like it was sketched in about five minutes. 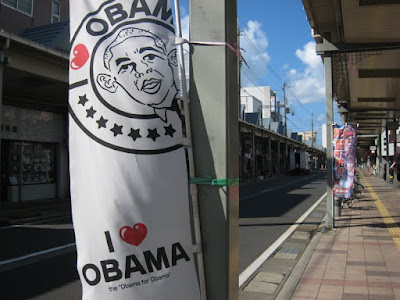 Do Obama's ears really stick out that much? What's going on with his left ear? And why does he have stubble for hair?

A local plumber was commissioned to create the statue of Obama that stands outside the town's department store. At least I think it's a statue of Obama. It's either that or a bust of a very tanned Japanese guy out for a night of karaoke. 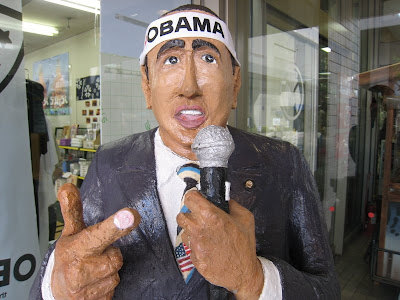 Whatever it is, it is clearly a very special statue, as evidenced by the fact that someone went to the trouble of roping it off. Don't touch! It's art! 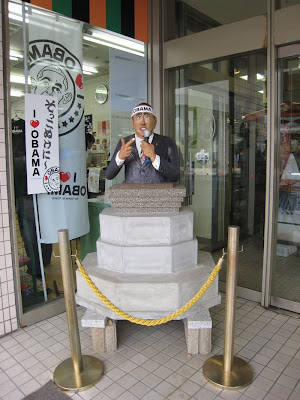 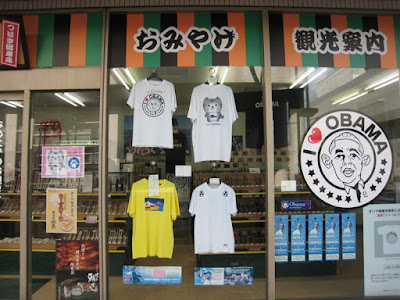 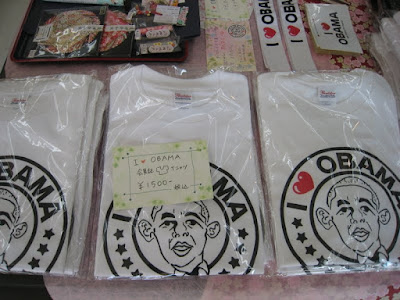 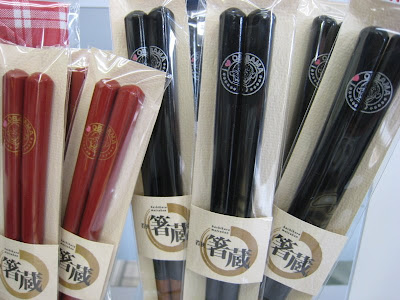 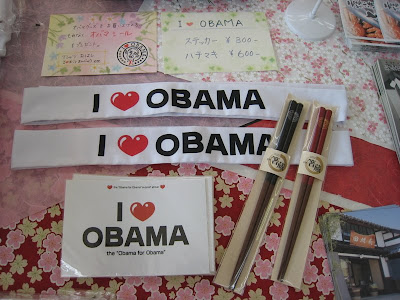 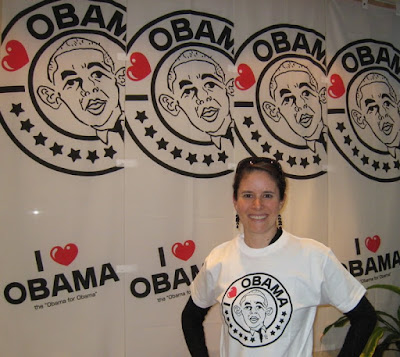 My friend Aiko and I even met a local celebrity. Seiji Fujihara, secretary-general of the Obama for Obama Support Group, introduced himself to us after he saw us taking pictures of an Obama poster. He said he hopes to go to Washington for the presidential inauguration if Obama wins.

Mr. Fujihara also told us that the members of the support group recorded a theme song called "Obama is Beautiful World." You can find copies of the CD for sale in the lobby of the Hotel Sekumiya. 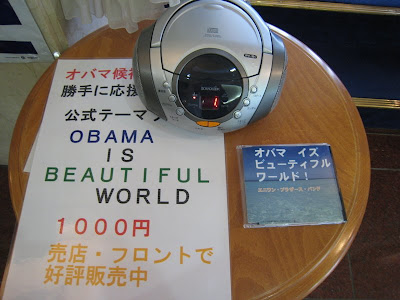 Mr. Fujihara played the CD for us. Let me share some of the lyrics with you: "The sea spreading far out and the bright sunshine reflect the future of your country, America. / Laaa. La-la-la-la. O-ba-ma! / Obama is beautiful world! / Obama is Number 1!"

I was so inspired that I filled out an application to join the Obama for Obama Support Group. I hope they accept me. I've got Obama fever and I need a support group to help me recover.

When we weren't meeting local celebrities, we were treated like celebrities. Two elderly men spotting us walking down the street and begged us to join them for tea. So we did.

For some reason, Japanese men over the age of 70 find me irresistible. They love me. Especially the drunk ones. Why can't I have the same effect on men my own age?

Over cups of hot green tea, we learned that they ran Obama's volunteer tourism office. They told us they hoped Obama would visit Obama if he won. And then they asked if they could pose for pictures with us. I felt like a rock star. With octogenarian groupies. 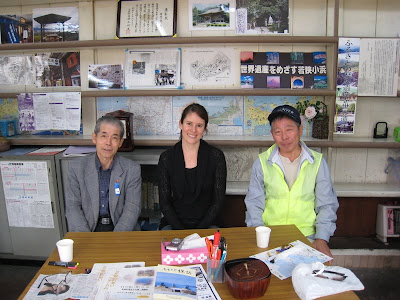 Despite its famous name, Obama isn't a tourist hotspot yet. Everyone seemed genuinely thrilled to have us there. I don't think I've been on the receiving end of so many deep bows in my entire life.

Locally, Obama is well known for its lacquer chopsticks and fishing industry. But there aren't many tourist attractions. So it is impressive to see this little town reinvent itself into a place that is attracting worldwide media attention. 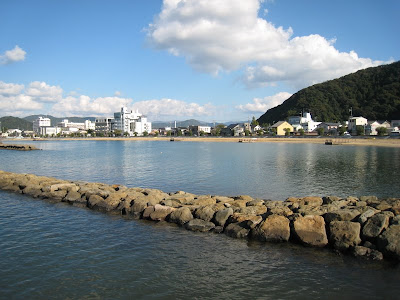 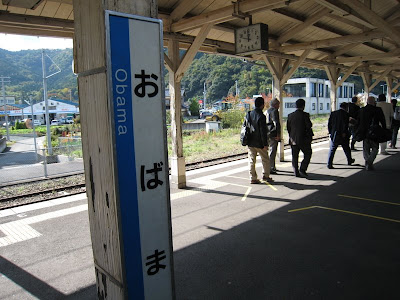 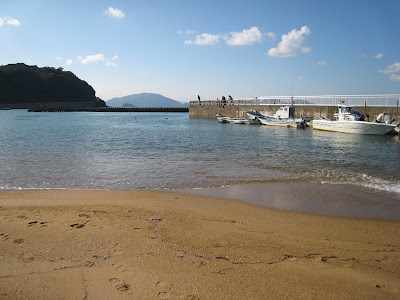 Another highlight of the trip was meeting Taako, who runs the Guesthouse Nima just outside of town. 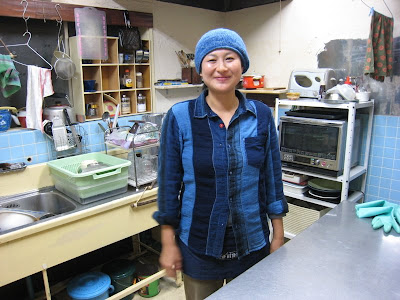 Taako left a career in teaching to set up a hostel after a life-changing trip to India. She is the hostel's only employee. She is cook, cleaner, manager, owner and host extraordinaire. And she does it all with a warm smile. If you are ever in Obama, I highly recommend staying at the Guesthouse Nima. 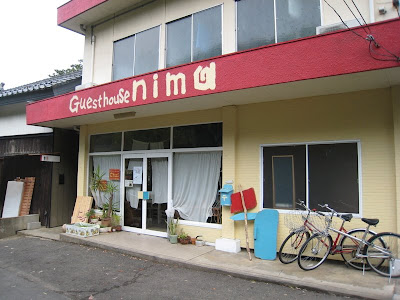 If that's not enough to tempt you, perhaps the beach behind the guesthouse will provide more incentive to make the pilgrimage to Obama. 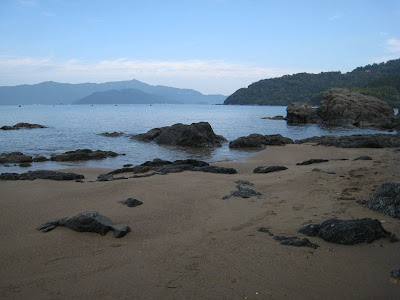 The flipside of its remote location is that the hostel is somewhat difficult to find. Aiko and I almost never arrived at all. It was our own fault. Neither of us bothered to print a map. The directions on the website simply said to walk with the ocean on your left side for about 10 minutes.

It seemed clear enough. Except it turned out that there were many different streets where the ocean would be on your left side. After walking around in circles for about 25 minutes, we decided to wave the proverbial white flag and ask for help.

The only problem was that there was absolutely nothing around. No convenience stores, no restaurants, no gas stations. Nothing. We were literally in the middle of nowhere.

He also spoke no English. However, in times of emergency, I can magically speak and understand fluent Japanese. I told him that I had written down the hostel's phone number and asked him if he had a cell phone so that we could call the hostel to ask for directions. Luckily, he had a cell phone (I'm not sure why he didn't think of calling to ask for directions himself). Had we not run into him, we probably wouldn't have found the hostel at all.

It turned our Japanese saviour was a fellow Obama fan. He traveled from Osaka to Obama for no other reason than to buy a t-shirt. Back at the hostel, we all decided to put our t-shirts on and pose for pictures. You can see our little photo shoot on Taako's blog (hi, mom. I'm famous in Japan!). 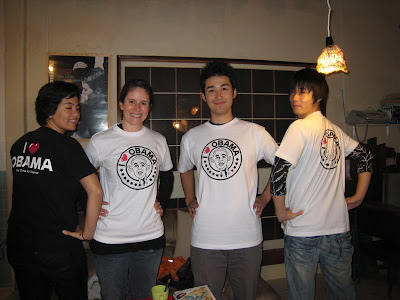 I hope Obama wins the election tomorrow night. President Obama will be good for America, good for the world and, most importantly, good for Obama, Japan.

Thanks for this post. I'm going to Obama today (from Maizuru), and I needed background info... specifically whether or not I can pick up a t-shirt.
Looks good!

How was the trip? Did you get a t-shirt? I imagine they must be selling them since 2012 is another election year...